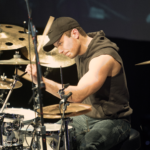 Damian is one of Australia’s most exciting drummers and educators. His camps in Melbourne routinely sell out. This is the perfect chance for your child to begin or enhance their Drum Kit journey. The GW is proud to have Damian in residence. Numbers are limited get in quick to avoid disappointment.

Damian Corniola has been touted as Australia’s nova in the wings. He has studied with and been influenced by many international drumming legends and has successfully welded their drumset wizardry into his own individual, powerful and eclectic style. Damian was christened into the world of drums at 15 months and at the tender age of 4, performed with The Drumtek Junior Ensemble at the 1993 Ultimate Drummer’s Day. He went on to astound attendees at the Australian International Music Show in 1994, 1995 and 1997 with exhilarating displays of independence, groove and maturity beyond his years. At 10, Damian released the top-selling, instructional video, Inspirations – a world 1st. He signed to Sabian and Vater drumsticks as the youngest endorsee in Australia and opened for Dennis Chambers at a major drum clinic in Melbourne and embarked on his first national clinic tour supporting renowned drummer/educator, Darryn Farrugia.

Damian’s extraordinary fusion of odd time meters, polyrhythmic interpretation and double bass ascendancy led him to win Australia’s Best Up & Coming Drummer Competition Junior title in 1997, Intermediate title in 2001, 2002 and 2003 and at the tender age of 16 won the open category. He still holds the record of being the youngest drummer in OZ to win the open competition at 16 and all three prestigious national categories.

Damian was invited to perform a series of masterclasses at the inaugural PAS – National Drum & Percussion Camp 2014 at Elder Conservatorium of Music, University of Adelaide.

For the past ten years Damian has been part of the teaching faculty at the Drumtek School of Music, including recording & performing with many high profile bands and artists.

Currently he is in the finishing stages, composing material for his highly anticipated debut solo CD and drum DVD releases.