Posted on December 23, 2015 by Groove Warehouse 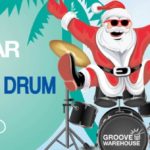 The Groove Warehouse’s end of year concert, “The Power of Drum” was a huge success!

The following is a review of the evening by Ian McLean.

Review / Percussion raises the roof at The Street

There was hardly a spare inch of room on the Street Theatre stage as a capacity audience entered for The Power of Drum.   I counted 15 drum kits, numerous marimbas, xylophones and glockenspiels, a complete steel band, a colourful collection of Indonesian gamelan instruments plus varied tom toms, African drums and a wide assortment of hand held percussion bits and pieces.   Then there were marching drums, quad toms and cymbals etc carried on and off stage by the Grooveline Drumline and the Burns Club Pipe Band Drums Corps.   A stage management nightmare for sure!!!

This certainly was the largest selection of percussion instruments I’ve ever seen gathered in one place and all to celebrate the first anniversary of Groove Warehouse, a school for drumming established by internationally renowned percussionist, Gary France.   Players ranged in age from 3 to 83 and were of varied standards of ability and development.   Getting so many players and instruments on and off stage was a difficult logistic exercise but no one seemed to mind the lengthy gaps between acts – the good natured audience was there to admire what had been achieved by the  sons/daughters/parents and grandparents who had delved into the world of drumming since the formation of the School.   Gary himself played MC and performed with most of the training groups.   His humorous commentary certainly demonstrated the absolute passion he has for this venture.

Amongst the experienced, professional players some presentations were outstandingly good.   Accompanied by a backing band of 5 fellow percussionists Christina Hopgood was virtuosic as she played a technically demanding Bye Bye Medley on xylophone and glockenspiel and special guest Dan Graetz demonstrated complete mastery of African drums as he led the Global Groove African Ensemble in a happy, celebratory tune, Ku Ku.

The Groove Warehouse Steel Band (with much loved Courtney Leiba in as cameo conga appearance) were tight and musically disciplined in a bracket which ranged from Kokomo and Blue Bayou through to The Little Drummer Boy and the Drumline group showed potential for development into a slick group.   Gary is able to teach large groups of drum kit students using electronic drums and audio technology.   It was quite a visual and aural experience to see 12 or so kit drummers well synchronised to a funk style backing track.

The finale was something special with the 100 odd entire cast gathered on stage with every conceivable percussion instrument to accompany Matt Davis on guitar and Stephen Fitzgerald on bass in a rousing rendition of Wipe Out.   The audience of course joined in with their own percussion instruments, hand and feet, to bring a joyous, happy concert to an end.

Gary France deserves congratulations for bringing his dream to fruition.   In a city lamenting the seeming demise of the ANU School of Music his drumming school is providing training and performance opportunities for rank beginners, community players and professional musicians.   To see all gathered together having such fun certainly demonstrates the power that music possesses to bind communities together.